Karl May is the leader of the Tour after three stages. He missed the first stage, but was crowned in Ireland and finished second last weekend in Norway. Can his good form last for the whole season? 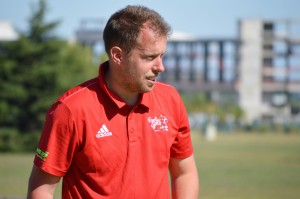 You are in the form of your life. What is the secret?
I am feeling confident at the moment and thinking more rather than just going out and playing, and this has led to me having a brilliant month with 2 wins and 3 other podiums in UK and European competitions.

What was your weekend like?
I arrived in Norway late Friday night, so couldn’t practice and tried to play the first course from memories of the last year. I played really well on the first course to shoot -10 and then on day two, I wanted a fast start to try and catch Jordan Godfrey, which I was able to do within the first couple of holes.However Espen Enevold was brilliant on his home course and as well as I played there was no stopping him and nothing I could do to catch him.

You played two different courses on the weekend. Which one was harder?
The first course was slightly harder as that required a lot more thinking behind your play. The second course was also fairly tough but this was due to the fact that two holes were very risky and could lead to high scores plus it had a 275 yard par 6 that was playing against the wind.

What do you need to do to stay on top in Europe?
I need lots of luck as there are so many great footgolfers playing on the European Footgolf Tour this year. Hopefully I can go to the Capital Cup and try to finish firstly in the top 50 and then try to work my way up to the higher places. France is also under consideration at the moment as a potential go to competition. If I can still be high up after those two tournaments, then who knows…

Actual standings of the EFT

Next event in Holland

No one can beat him in Norway?

Khatib: I could have easily won in Norway

No Replies to "May’s brilliant month"