Four stage-winners will be in Hungary

With only four stages left, the IV. Hungarian International Footgolf Open will be an important part of the 2016 European Footgolf Tour. The two-day long tournament will be held on two different courses in Kisoroszi, just outside Budapest, this weekend. 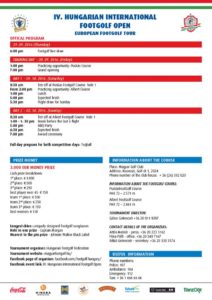 “Every winner of the short history of our international tournament will be in the Hungarian Golf Club in Kisoroszi again. Krisztián Bogár from Hungary, David Mancino from Switzerland and defending champion Ben Clarke from the UK also.” – said Gábor Gelencsér, President of the Hungarian federation. The Hungarian stage will be on two different courses within the golf club, 18 holes will be played on Saturday and on Sunday as well. The tournament has €3.000 cash prize.

The weather forecast shows 26 degrees Celsius for Friday (practice day) and for Saturday and a chance of rain for Saturday with 24 degrees.

One hand on the title?

No Replies to "Four stage-winners will be in Hungary"