Before the start of the 2017 European Footgolf Tour, we asked stage-winners to look back at the “old days”. How do they remember their glorious moments? Espen Enevold is the only one, who defended his stage-winning title, in addition he did it on his home soil. 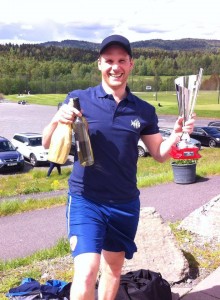 Norway was part of the Tour from the beginning. In 2015 and 2016, the winner was Espen Enevold. The Norwegian talks about the double.

“I remember it as a fantastic weekend with lots of international players taking the trip to Norway. It was great to compete with some of the best in the world.” said Enevold about the last two Norwegian Opens.
“I am extremely happy winning it in 2016, as I had to chase the leaders on the last day being behind players such as Jordan Godfrey and Karl May. It is of course special to win it twice, and even more special when the field was of such a high quality.”

He admitted, he is a bit disappointed with his performance in Europe, because did not reach the podium in any other events.

“My plans for this year are very limited as I have another daughter in May. But will definitely play Norwegian Open in June and hopefully win once more.”

The magnificent year with a proud ending

No Replies to "Can he do the treble?"