Before the start of the 2017 European Footgolf Tour, we asked stage-winners to look back at the “old days”. How do they remember their glorious moments? Julien D’Espine won the French stage in 2014, during the first Tour. After a long recovery, he wants to strike back.

The French Open was the fourth round of the very first Tour three years ago. The only Swiss player in the competition was the best on that weekend. 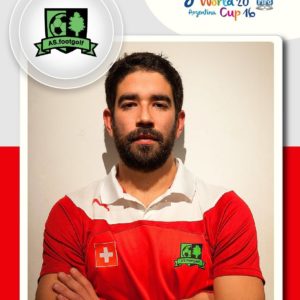 “I remember very well my victory in Paris. I was the only player on the Swiss team available for this stage. I played one of my best rounds of footgolf in my life. I played both days with Nicolas Cousin, Alexandre Richer and Yohan Bouix.” said D’Espine.

He remembers well his last putt.

“It was incredible, after so much pressure. The prize was a trip to Rio de Janeiro to see a World Cup match at the Maracana. A dream came true.”

Unfortunately, he had a knee injury during a football game and had to stop playing footgolf as well for a whole year.

“My goal for this year is to participate in as many tournaments as I can. It will be nice to start to compete again and especially to take pleasure to play with my Swiss and foreign friends.”

From frustration to Europe’s number 1

No Replies to "Julien D’Espine: The last putt was incredible"