The magnificent year with a proud ending

Before the start of the 2017 European Footgolf Tour, we asked stage-winners to look back at the “old days”. How do they remember their glorious moments? Béla Lengyel, the first world champion won the last leg of the Tour in Portugal in 2014. His victory meant, he finished third in overall three years ago.

“It was not just a great weekend for me in Portugal, but it was a magnificent year. I won seven stages from the eight in the Hungarian Championship, and finished second once. I won tournaments in Slovenia, Croatia and Italy. I was second in the Hungarian Open.” said the 2014 European bronze medalist and former World Champion. 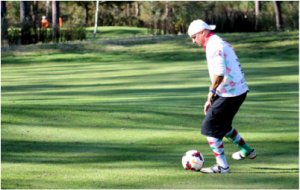 The last stage of the Tour was so important for the Hungarian because of the overall ranking.

“We were calculating with my teammates before the Portugal leg, that I had to win to reach the podium in overall. I kicked a hole-in-one and won the tournament after a long Sunday. It was almost dark, when we finished the game.”

Lengyel thinks, the quality of the Tour has become higher and higher year on year, and there are around thirty players, who have the ability to win a stage at any time.

“I am going to start the season in Spain next week, but I need knee surgery. I hope, I can come back to the sport in the summer, there are some great competitions on the Tour that I don’t want to miss.”

The first hat-trick in footgolf history

No Replies to "The magnificent year with a proud ending"