The real Ironman extremely proud of his win in Holland

Before the start of the 2017 European Footgolf Tour, we asked stage-winners to look back at the “old days”. How do they remember their glorious moments? Nick Iron won two tournaments in 2015, but the win in Holland means more to him.

Nick Iron was the first British player, who would win two EFT stages. He was the best in Ireland and in Holland two years ago. 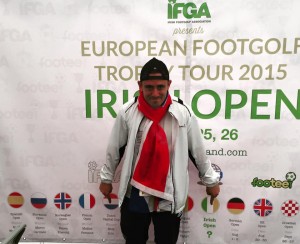 “I remember my two winning stages of the EFT very well. They were both special as it’s always nice to win a competition. The win in Ireland was an amazing competition, but the Capital Cup was the most special for me, collecting my first major victory in Europe as this a major competition in my opinion with over 200 people from all around the world.”

He thinks it is a competition that every footgolfer wants to win.

“My dream came true to win it, as becoming the first UK player ever to win a major tournament in Europe. It is something I am extremely proud of and being in one of my favourite cities (Amsterdam) made it special.”

He describes his last winning putts as an amazing feeling.

“It was full of joy and excitement and ones I hope to feel many times again in my footgolf career. I feel I have developed my game very well since my wins. Footgolf is an amazing sport and I have been playing for three years now, and every time you play you learn something new.”

His plan is to play in Italy and Ireland in 2017, and he will see later in the year if he can play more stages.

Esposito’s victory was full of emotions