Jenkinson: “No plan to win it after Saturday”

Cathal Jenkinson was only 14th after the first day of the second stage of the 2017 European Footgolf Tour in Ireland, but after a brilliant round on Sunday he overtook everybody and won his first big international tournament. The Irishman’s next EFT event will be the Norwegian Open.

What was your plan before the weekend?

My goals before the weekend were to be in the top 4 Irish, the top 10 in the Open and contribute to the Irish team winning a medal of any colour. My preparation was excellent and I was mentally ready for tough conditions on Saturday. When Chris Grace and I hit -7 in the pairs event without doing anything special, I knew a monster score was possible.

Was it an advantage to play on home soil?

Yes and no. There is always a little more expectation to perform at home but I don’t play that course often and there were several new holes I hadn’t seen before Friday so no real advantage there. The actual advantage of playing at home is having so many teammates and people supporting you in any way they can, on and off the course. We really are a team and I wouldn’t have got close without them. 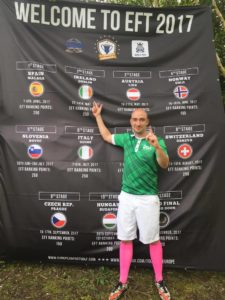 Cathal Jenkninson was the best on the 2nd stage

After finishing 14th on Saturday, did you at all plan to win the tournament?

Realistically, no. I was 4 off the lead but I didn’t really do anything wrong on Saturday. I thought it would be too much to catch everyone but 1st Irishman and top 10 wasn’t out of reach.

What was the turning point on Sunday, when you realised, it was possible?

There were probably three big moments. I hate the 6th hole and I smashed my drive down the middle and snaked in a brilliant birdie putt. That gave me -6 through 6 holes and I thought something big might happen. I said to myself 100 times “no one cares how you started, it’s what you finish on” and calmed myself down. After I bogeyed 12, I birdied 13 and 14 and I started letting myself think ahead. I stopped that straight away. The third moment was walking to the green on 17 and Ronan Lynagh’s dad asked me if I was really going to win. It was the first time I knew I was leading. I sank a 20 yard putt for birdie and birdied 18 from right beside the hole and then the long wait started! I had done all I could.

How strong is your nation now?

Ireland has such strength, that it’s incredible. We don’t have as many players as we would like playing competitively but the ones that are have great talent. I’ve only won two domestic events out of 23 before the Irish Open (and one was last week), so the quality is so high. It’s great to compete against and alongside them and I look forward to Ireland having strong teams in Capital Cup and Norway next month.

What EFT stages do you want to attend in the future?

My focus for this season is the EFT. I have such respect for what the guys have built from nothing. I will try to challenge next month in Norway on a spectacular course but there are many great names already in the field. It looks to be a high quality event and I expect a lot of players to sign up after enjoying the company of many Norwegians all weekend. I am also targeting Slovenia, Germany, Switzerland, Hungary and hopefully I can stay in contention coming up to the finale. It’s a long season and I can’t wait for the next stop!

Two metres from the Championship

2 Replies to "Jenkinson: “No plan to win it after Saturday”"