The United Kingdom won the team competition of the fourth stage of the 2017 European Footgolf Tour. Jamie Cullum finished third behind Espen Enevold and Ben Clarke, which is his first podium in the history of the Tour.

First time on the podium on an EFT stage. Congratulations!
Thank you. It’s definitely up there as being one of my best results. It ranks alongside winning the fourth stage of the French National Tour in Marseille and also finishing 5th at the UK Open in 2016 as I had only been playing footgolf for 4 or 5 months at the time. 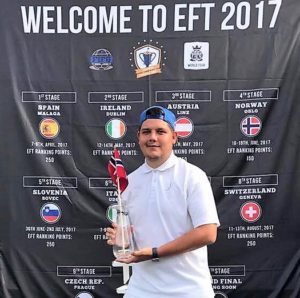 What was behind this Scandinavian success?
To be able to finish third, I knew I needed to believe it could be done. I always tend to play a lot better on the final day, so I knew I was capable of posting a good score and climbing the leaderboard.

No par or under par results on Saturday, why?
The course was very difficult. It would punish any poor shot or any shot which left you out of position.

At what point did you realise third place was yours?
The moment I knew I finished on the podium was just after the final group finished. I watched them come in and once I knew what everyone shot on Sunday I knew I had finished third.

What is your schedule for the next months?
My main focus is the World and UK Tours, however I still want to play as much of the EFT as possible. I will be playing in Italy, Switzerland and Hungary. I will also try to play the Grand Final if I can fit it in.

Enevold is the king of Scandinavia

No Replies to "Jamie cooked well in Norway"