Ben Clarke finished second on the latest stage of the 2017 European Footgolf Tour. He visited Norway for the first time, and came to realise, on the brand new footgolf course at Krokhol Golf Club, that it was not so easy to play par.

Were you satisfied with your performance?
The Norwegian Open was really enjoyable. It was my first time competing there and the people involved were great. I’ve also got family out there so it was nice to catch up with them after day one. I’m fairly satisfied with my performance, it wasn’t a perfect but I’m pleased with how I played on, what was a very mentally challenging course that could easily punish you. 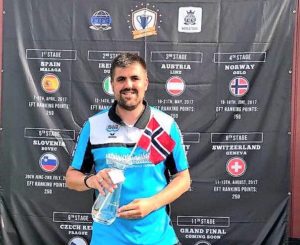 How did you like the new course in Norway?
I really liked it. I think it’s one of my favourites just because of how challenging it was! It gives you a bit of everything and plenty to think about!

Is it strange that after two days only Espen Enevold could be under par?
I guess it’s a strange thing to see in footgolf only one person being under as there’s always lots of birdies but on that course there were just as many potential bogeys as birdies.

Why were there no players under par on the 1st day?
I’m not sure why there wasn’t any but it was proved it was possible on the second day. I felt it was possible to go under par both days but that is footgolf, where you never know what can happen.

What’s the plan for the rest of the EFT season?
To keep playing. I have a few more events in my mind that I want to play on the EFT, and hopefully that will leave me in a position I’m happy with.

Will the “King of Scandinavia” conquer the rest of Europe?

No Replies to "A strange course, the mental challenge and the podium"