Will the “King of Scandinavia” conquer the rest of Europe?

Espen Enevold is unbeaten in Norway since 2015  in all  EFT stages. He has defended his title twice. Last weekend he was the only player, who scored under par. His war-mode helped him to gold.

Not one player scored under par on the first day, was the course of Krokhol Golf Club so difficult?
I wouldn’t say that day one was harder than day two, where we saw much better performances. Krokhol is a fine balance between power and tactics so it was more about players getting used to the course, knowing where to lay up and where to go for it. 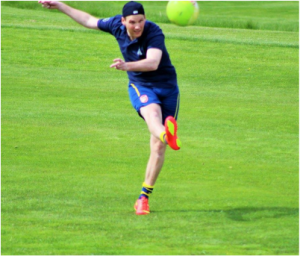 Was it in your mind that you can be the first player, who could defend his title twice?
I didn’t think about it as a hat-trick. It was more like a challenge for myself and how I could perform against the strongest field the Norwegian Open has ever managed. Even with a lack of practice I always believed I could win it. I was disappointed with my score after the first day, but of course I was happy with my leading position. Day two started with a double bogey and I found myself already behind Ben, Egil and Cathal after the first hole. Then I entered “war-mode” what could produce better or much worse results. Luckily, I made a hole in one and I was back on track. From there I played some really good footgolf and I was around six kicks ahead of Ben. But then I started to overcomplicate things and he punished my mistakes. Before the last hole I had a three shot lead and felt quite comfortable.

Describe your hole in one, please.
My hole in one was pretty much a result of my frustration from my double bogey at the first hole. Ben had taken the lead and I wanted it back so I chose an aggressive line towards the flag which is quite dangerous. This time it paid off. I would rather do three straight pars, than double bogey, par and eagle.

Now, after winning the Norwegian Open three times in a row, will we see you on other EFT stages away from Scandinavia?
It’s nice to win it the third time, but I need to prove myself abroad as well. I would love to travel more but success in Norway doesn’t necessarily mean success away from my country. I have already proven it with zero podiums on my five international tournaments. Unfortunately, I can’t do any EFT’s stages this year, even though I really want to. Maybe I will accidentally show up somewhere but then it will be a last-minute registration.

The Tour comes to Slovenia for the first time

No Replies to "Will the “King of Scandinavia” conquer the rest of Europe?"