On his six appearances during the 2017 European Footgolf Tour, Michael Wilkes finished first twice and was in the top 10 three times, which means, he is the leader before the last stage. He is trying to get the feeling of the Grand Final to be the European champion. 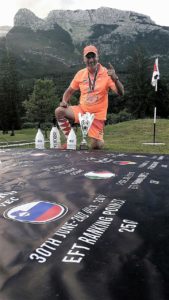 The best four rounds plus the Grand Final’s points count in the ranking system of the 2017 EFT. The Dutch Michael Wilkes has started to play footgolf two years ago, but now he is waiting the Grand Final from the first position of the EFT ranking list thanks to finishing first in Germany and Slovenia, sixth in Spain and seventh in Switzerland.

“I’m not the youngest on the course, but I don’t feel the pressure. It must be my age I guess…” – told us with a smile.

He thinks to be crowned the European champion, he has to play on the level he has been playing in 2017.”

“I have to show respect to my opponents, because thinking, it will be an easy one will not help me. I hope all together we are going to make this tournament a great one. I do not practice or prepare a tactic before the game, I just try to get the feeling.”

Can Lionel be the best again?

No Replies to "Wilkes does not feel the pressure"