Thijs and his goosebumps

Thijs van Rookhuizen was second after the first and second day of the Capital Cup also, but could manage to win the first European major of the year, the second European Footgolf Grand Slam. The Dutch player knew, that his last putt was perfect.

What was your plan before the Capital Cup?

Winning a major was definitely one of my biggest dreams. It is one out of the six biggest tournaments in the world and before this tournament it was only a dream, because finishing in the top 15 was my goal this weekend.

Is it more special to win it on home soil?

Winning it in the Netherlands makes it more special, because my family, friends and a big group of Dutch and international footgolf friends were on the course as well, supporting me through the whole final round. That gave me some extra power to this win.

Was any particular sign of this glory during the season?

Since my second place on the Dutch nationals in 2017, my form is good. Finishing 3rd in Turkey was a good start, then I have reached the podium three times in the Dutch qualification tour (twice 1st and once 3rd) and many top 10 finishes in national and international tournaments. 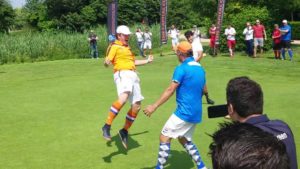 After the last putt

You started the major well…

After the first day I came in second with one shot behind Vincent Huber and after day two, I was still on that second place, but three shots behind him. Vincent played very constantly with his amazing kicks. When I woke up on Sunday, I knew that everything was still possible, because playing in a final flight always makes someone a bit nervous. After three holes on the final day we were already tied with Vincent, but Tomas Bartko took the lead with an amazing eagle and some good birdies. After the difficult hole number 7 I took 2 birdies in a row and then we came at hole 10. This hole was the key moment on this final day. It was a difficult par 5 hole with a  risky first shot around some water and the second over the water. My second shot felt good and pretty fast. I saw that was a good one and finished this hole with kicks. An albatross in the final flight in the final round gave me a really special feeling. My opponents played 5/5/4, so I took the lead and I kept it till the end.

Was it hard mentally before the last hole?

After hole 17 I was leading by one shot, and my first on the 18th went in the rough. The 3rd shot was good enough to give me a line for birdie and to the win. I had to putt from around ten metres and I knew, that putt was the winner kick. I have never had so many goosebumps in my life, winning in front of 300 people from all around the world was something which everybody wanted to achieve and feel. All the lovely messages, hugs and positive words made this win more and more special. This is something which I really appreciate a lot, so thanks again to everybody who made me feel special after the winning putt!

Can you repeat that performance?

Winning another major is definitely something to start dreaming about again, but with such a large group of top players from all over the world it’s not fair to say I am gonna win another one. The next stop for me is Italy with over 300 players, let’s see what it is going to bring me. The World Cup is my main goal this year, so qualifying is step one. We will see what happens when I reach it.

Are you satisfied that you got your “cash prize” in cryptocurrency?

It’s good that this kind of sponsors are taking part in the sport. I think the way of using this sponsor as prize money investor is not good. The crypto goes up and down very fast, which means, I still doesn’t know, how much I exactly won. So, I don’t think it’s good to use it anymore.

No Replies to "Thijs and his goosebumps"