After finishing always in the top 6 in the majors in 2017, Jamie Cullum has collected his first gold medal in an FIFG 1000 tournament. After winning the French Open last weekend, he is focusing on the Italian major and believes, he and the UK Team can win the World Cup in December.

Did you need a perfect start to win in France?
I had two good rounds on Friday and on Saturday as well and put myself in a great position to have a chance to win. I always prefer to be one or two kicks behind the leader going into the final round as I like to hunt them down and it’s a different mindset to be chasing than to be protecting a lead.

What was the moment, you felt, your haunt could be successful?
In the final round, I had a really good front 9 through the tough holes which gave me a 2 shot lead. I then made a double bogey on hole 10 which put me 1 shot behind. I then bounced back with birdies on 11, 12, 13, 14 and 15 which put me back in the lead. That was the point I knew that the championship was there for the taking.

What was your plan before the last hole? Take risk or play safe?
I love the 18th hole and I’ve never hit the ball into the water so I felt comfortable with the tee shot. I knew that par would give me the win so I could afford to play the hole safely. 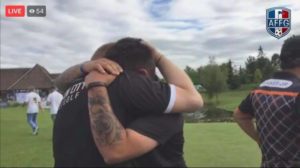 Describe the feeling right after the lust putt!
The feeling of pure relief! I had four top 6 finishes in majors last year and it feels amazing to finally have a major win in my collection.

Liam Shutes posted a picture with you hugging with the comment: “Sometimes pictures can say more than words”. What does it mean? How strong is your British footgolf family?
Liam and Ben Clarke are my best mates in footgolf as well as outside of footgolf so we share the feelings with each other when we win and lose. They know how much I wanted to win this event and are delighted to see me win it.  The UK footgolf family is amazing. We have a real sense of unity and we’re always rooting for each other to do well in events. We have a great bond ahead of the World Cup in December.

After long tournaments like Capital Cup and the French Open, can you still perform on as high level as on the last weekend or do you need to rest physically and mentally?
Of course these events are both physically and mentally draining and it’s good to take some time during the week to rest and reflect on my performances. However once the weekend comes around I’m always itching to play competitive footgolf as it gives me such a buzz.

What’s your next stages abroad?
My next event is the International at Celtic Manor as part of the UK tour. This will be a groundbreaking day for footgolf worldwide playing at such a prestigious course. After this I will then look forward to the third European major in Italy. Hoping to improve on my 2nd place from last year.

Have you dreamed about the World Cup already?
Of course. This is the ultimate goal for footgolfers worldwide. We will play on a course which I have won an event on so this gives me some confidence. I also believe we have a great chance to win the team event as the UK team will be extremely strong full of the worlds best players.

The 6th Italian Open is the next major

No Replies to "Jamie Cullum, the hunter"