A South American is the best in Europe

The Grand Final of the first edition of the European Footgolf Grand Slam was held in Castro Marim Golf & Country Club near Faro, Portugal. After three days, the Argentin Nicolas Garcia was the happiest man among the competitors winning the tournament and the Grand Slam also. Robert Tajtyi won the senior, while Susanne Berg the ladies category. The Netherlands collected the most points in 2018.

Nico Garcia (ARG) with an amazing -38 result have won the Portugal Open, the Grand Final of the European Footgolf Grand Slam. Jan-Willem Baas (NED) and José Maikel Alvarez Morales (ESP) tied on the second place two kicks behind the winner. The Dutch won the playoff grabbing the silver.

This gold for Garcia was enough to win the first European Footgolf Grand Slam ahead of Ben Clarke (UK) and Fabio Mazzer (ITA). 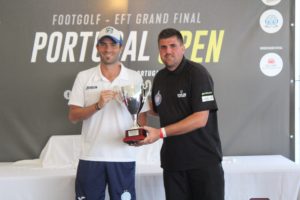 Herman van Eekeres (NED) won the senior category with a six-kick lead. There were four players on the second place, what was won by Róbert Tajtyi (HUN) – became second –, and Benoit Labat (FRA) have reached the podium. 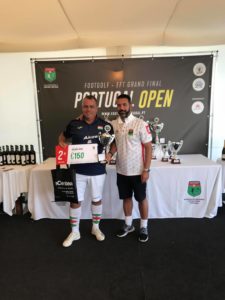 There was Scandinavian dominance among the ladies on the weekend. Caroline Opsahl Odden won the category in Portugal and Susanne Berg (both from Norway) became second. The bronze medal went to Switzerland thanks to Barbara Dos Santos.

At the end Berg finished first, the British Sophie Brown was the second in the season, Nienke Spaan (NED) won the bronze.

Spain was the best nation ahead of Switzerland and the Netherlands. The Dutch team collected the most points during the season, Italy and Argentina finished second and third.

The Grand Final countdown in Portugal

No Replies to "A South American is the best in Europe"